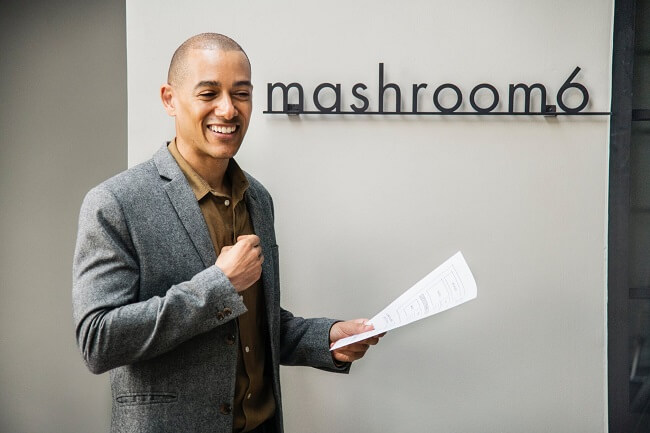 What are the Habits of the Most Confident Person in the Room? 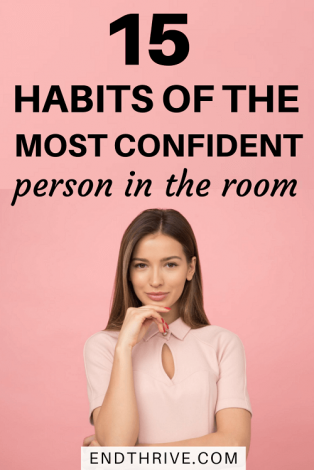 Some people just have it.

You can see it in their walk, the way they greet people, and the way they handle themselves in social situations.

Confidence is often the single largest distinction between people who get what they want and those who don’t.

So if there’s one thing that this book taught me, it’s this:

Confident people always have the upper hand over people who are insecure.

Our mind is a powerful tool. The influence it has on what we’re able to achieve in life shouldn’t be underestimated.

So how do you define confidence?

In the simplest terms, it’s a trust you have in yourself. It’s that feeling of self-assurance you have when you appreciate your qualities and abilities.

It’s when you know what you bring to the table.

Want to know the best part?

Confident people report earning more money, getting more promotions, and are all around happier people.

So what exactly is it that they do differently? Let’s get into the self-confidence examples.

“Believe you can and you’re halfway there.” 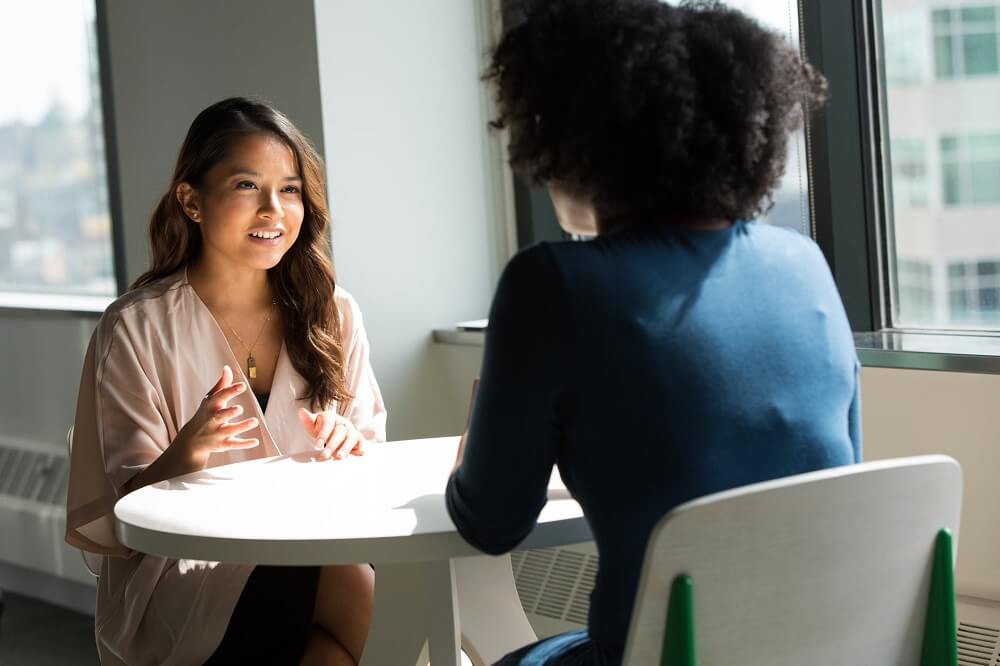 Have you ever wondered what makes someone have that it factor?

As it turns out, there are 3 main things that help you project confidence and charisma. One of them is your ability to actively listen.

Insecure people tend to speak more than they listen.

They want to share their opinions, views, and stories with everyone. They feel like they need to be heard to be important.

But, confident people listen. They don’t have to speak to add value.

They have that it factor that you can’t really put your finger on – you just know it when you see it.

It comes down to this:

There’s a difference between listening and really listening. Confident people understand that difference.

They actively listen by giving you their complete and full attention, instead of waiting until it’s their turn to talk.

Related: The Charisma Myth: How Anyone Can Master the Art and Science of Personal Magnetism 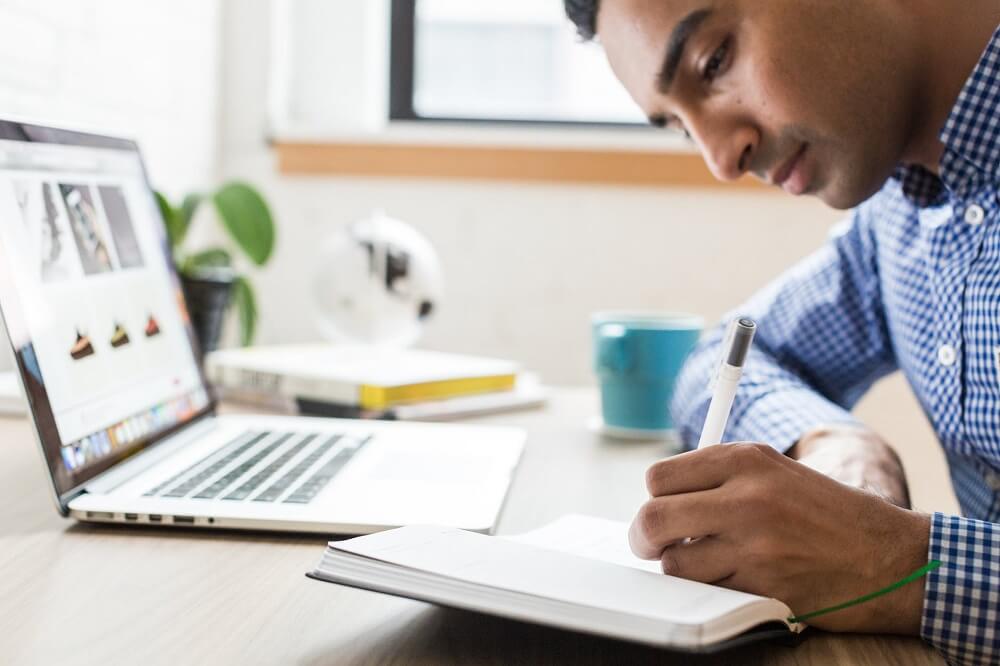 “The trouble with not having a goal is that you can spend your life running up and down the field and never score.”

Several years ago, Harvard University did a research study about goal-setting. They asked students if they had set specific, written goals, as well as if they’d made clear plans to achieve them.

Here were the results:

After 10 years, the same group of students were interviewed again.

The results were surprising:

The 13% of the class who had goals, but did not write them down, earned twice the amount of the 84% who had no goals.

The 3% who had written goals were earning, on average, 10 times as much as the other 97% of the class combined.

Chances are, this isn’t the first time you’re hearing that you should have written goals. It won’t be the last.

There’s a reason why books like these are so popular. Those principles will transform your life.

So here’s what it comes down to:

The man at the top of the mountain didn’t fall there. He set goals, developed a plan, and worked hard to get there.

So what are you waiting for?

Related: The 12 Week Year: Get More Done in 12 Weeks than Others Do in 12 Months 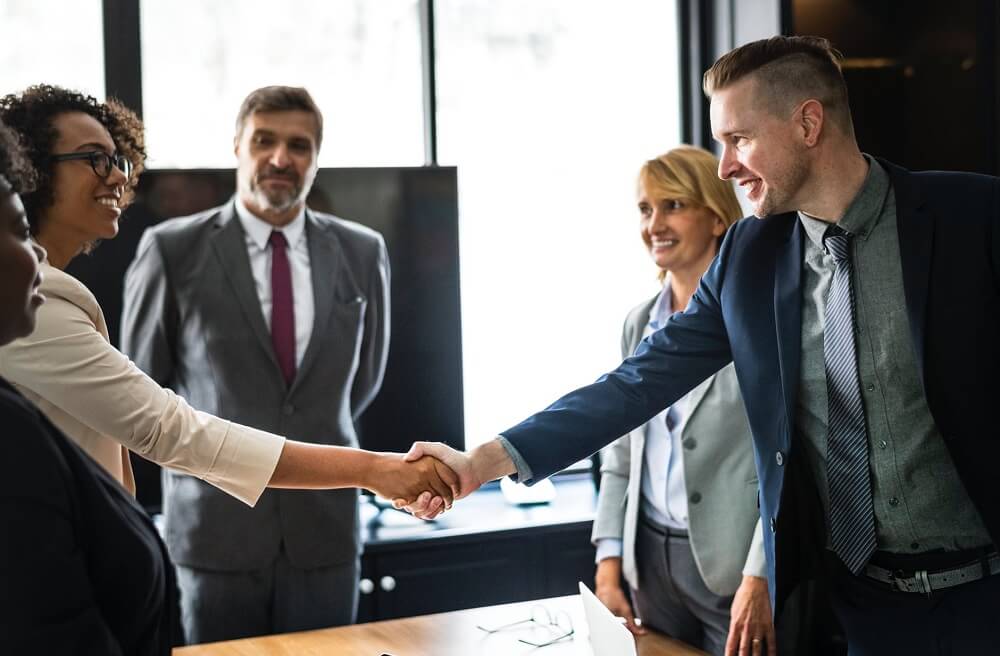 Someday is not a day of the week. If there’s one thing I can share with you in these self-confidence examples, it’s this:

Waiting for the “perfect time” or the “right opportunity” wastes time.

There will always be a million reasons on why you should wait, put off, or try something else. But time is limited. You don’t have forever to do this stuff.

Acknowledge the doubts and fears you might have but keep pushing forward anyway.

When you take action, you trigger other things that will carry you to success.

People start to respect you.

You attract people with similar goals into your life.

So get busy living.

4. They See Failure as a Great Opportunity 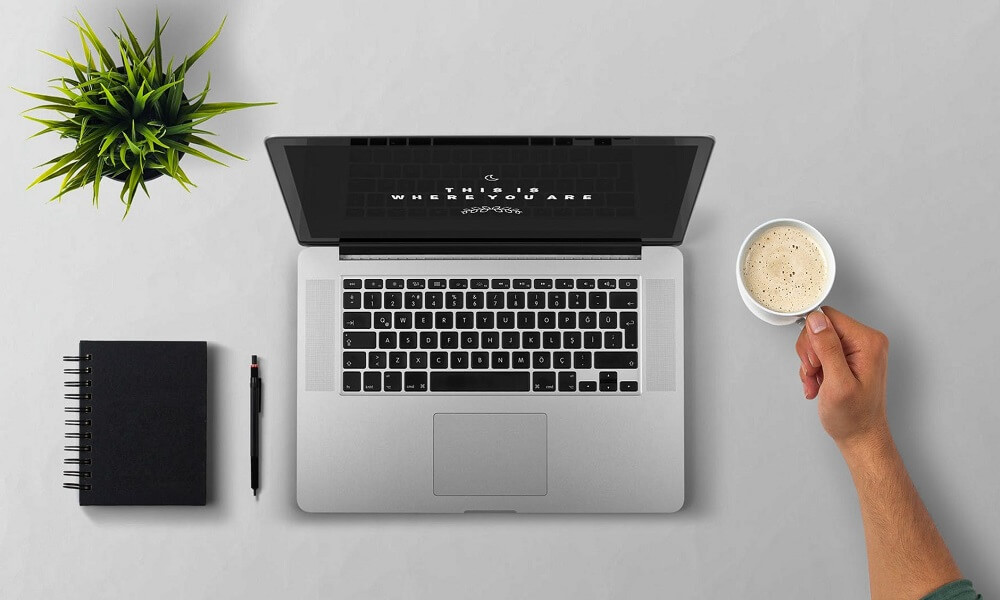 The simple truth is this:

No great success was ever achieved without failure. It could’ve been one epic failure or a series of failures.

Nobody is immune to failure, not even confident people.

After all, it’s not the strongest species that survive, it’s the ones that are the most adaptable.

“Giving up is the only sure way to fail.”

5. They Don’t Avoid the Scary Thing 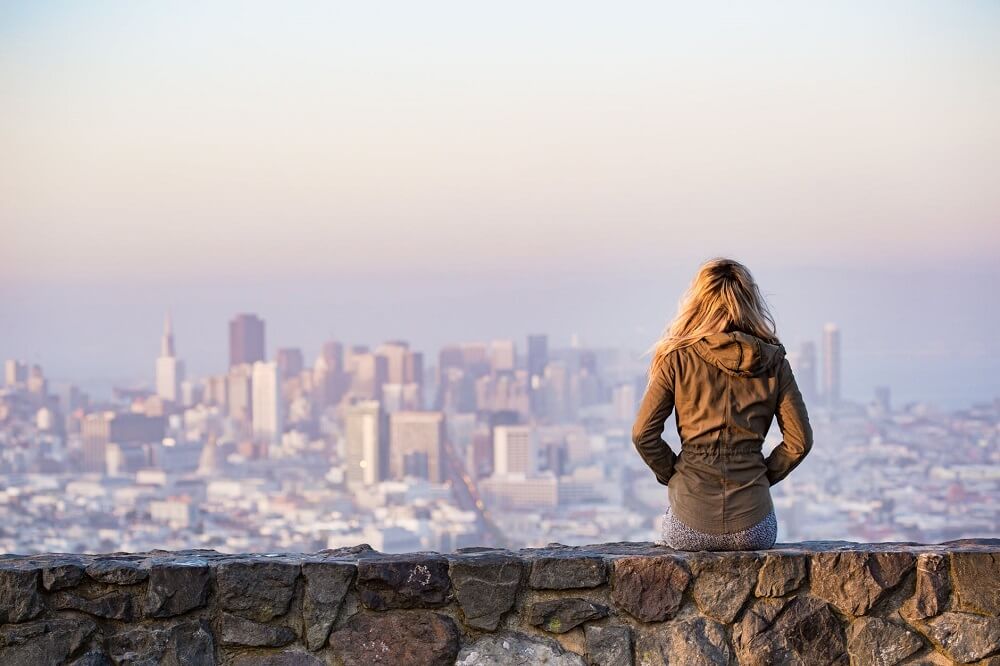 Have you ever wanted to try something but let fear hold you back?

You had a dream and you killed it.

The more you go after what you want in life, the more likely you’ll have to face something that makes you nervous.

Confident people acknowledge that fear is a natural part of the human experience.

I once heard someone say, “Start before you feel ready.”

Nothing builds confidence like taking action, especially when that action is scary. This is a prime self-confidence example.

What will other people think?

What if I fail?

How do I explain this?

If I don’t try it, will I regret it later?

“We are all failures – at least the best of us are.”

6. They Don’t Obsess Over Other Peoples Opinions 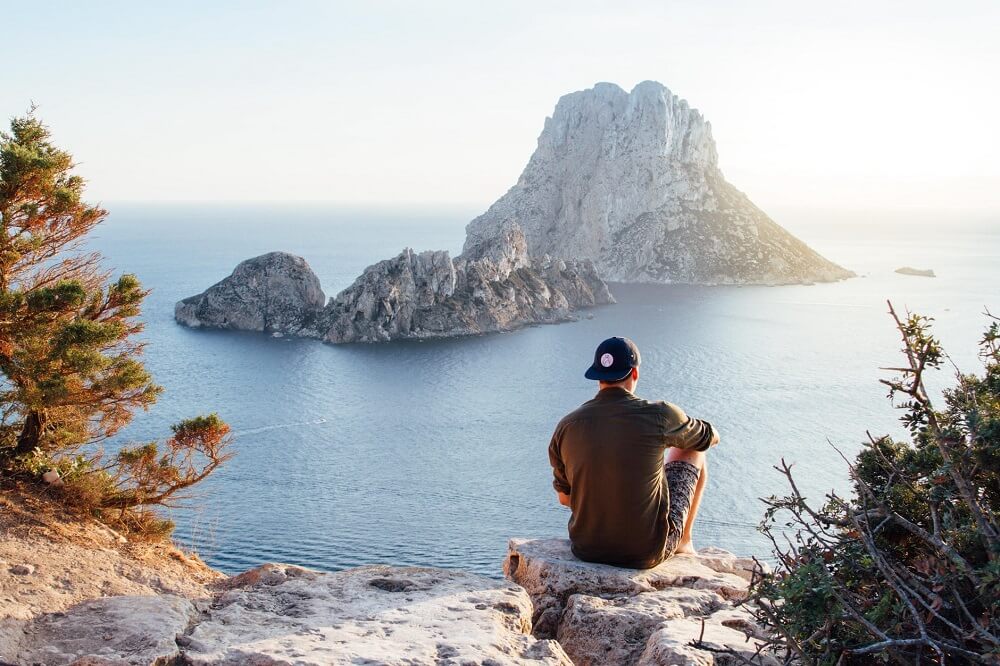 They take action without asking for permission. They remind themselves, “If not me, then who?”

If you rely on other people’s praise to lift you up, then be prepared for their criticism to tear you down.

Here’s a truth about life:

You can’t please everyone you meet. Everyone doesn’t have to get along. It’s okay to not be everyone’s cup of tea. That’s how life works.

Confident people understand that. So instead they focus on the quality of their relationships, not the quantity.

Related: The Art of Extraordinary Confidence: Your Ultimate Path to Love, Wealth, and Freedom 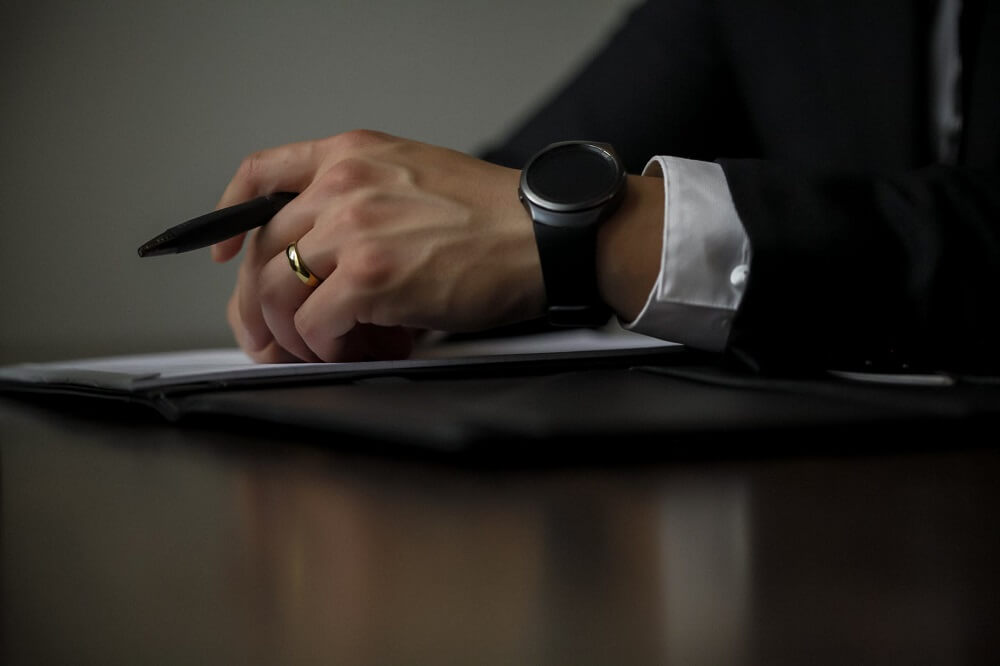 A study by the University of California found that people who struggle with saying “no” are more likely to experience stress, burnout, and depression.

There are times when you have to learn to say no.

Confident people are happy to decline the things they don’t have time or energy for.

They know their priorities.

And they understand what makes them happy, and people treat them with respect because of it.

“When you say yes to others, make sure you aren’t saying no to yourself.” 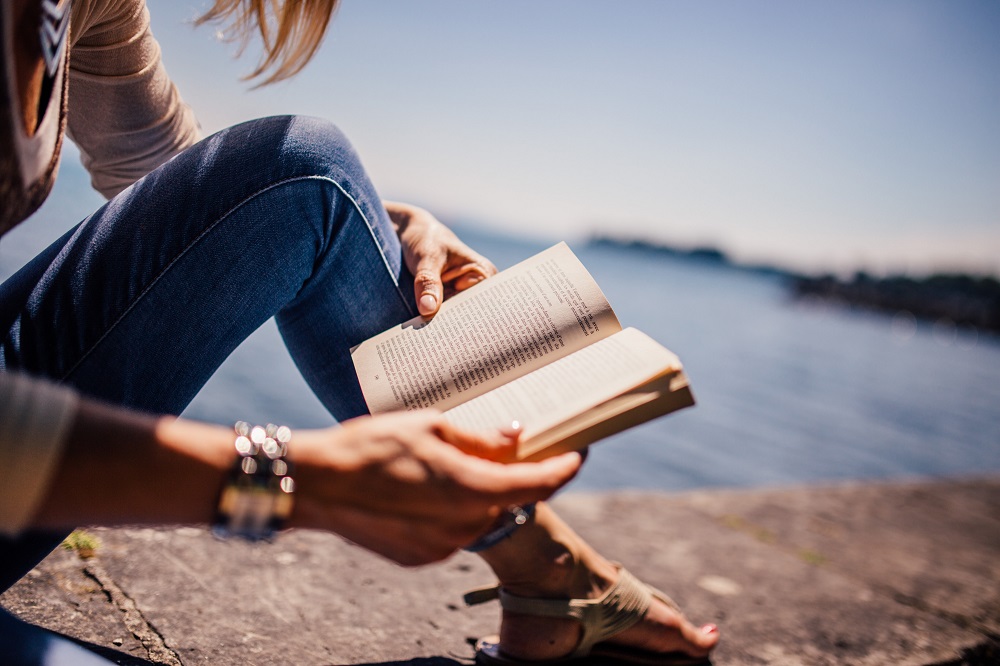 One of the best things about life is that we never have to stop learning. There’s always new skills for you to learn and new habits to adopt.

Warren Buffet is one of my favorite self-confidence examples. He spends a lot of his time reading.

And if that’s not enough reason to learn, here are a few more:

Learning gives you something to look forward to.

What did you learn today?

Related: Unfu*k Yourself: Get Out of Your Head and into Your Life 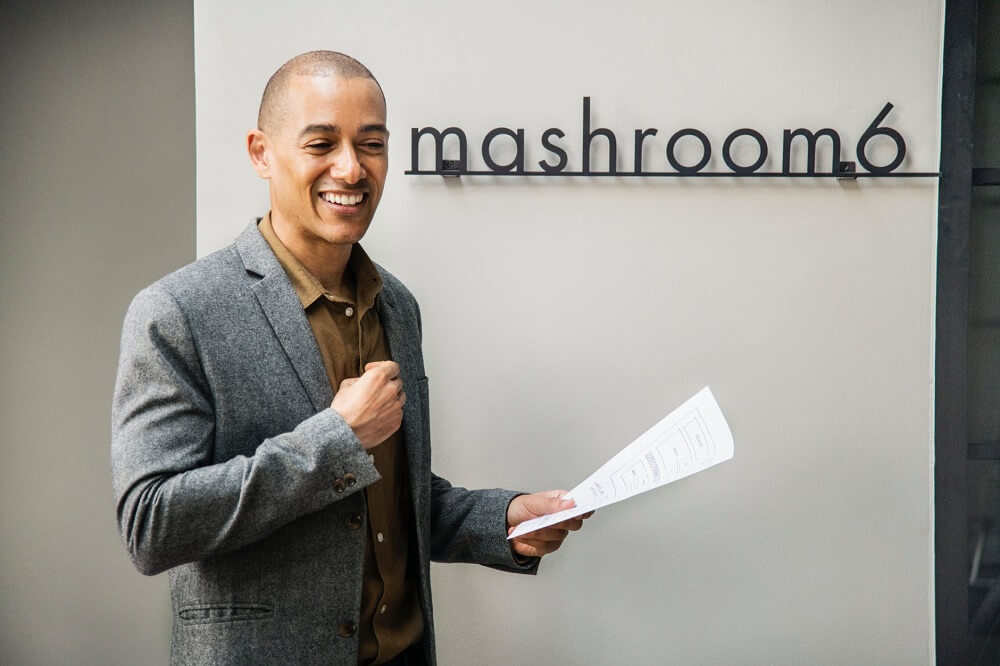 They play to their strengths.

They don’t have to know everything to feel like they know something.

They’re open, collaborative, and willing to share what they know with other people.

If you know anything—and I know you do—you should be sharing what you’ve learned with other people.

“The only thing to do with good advice is to pass it on. It is never of any use to oneself.”

10. They Celebrate the Success of Others 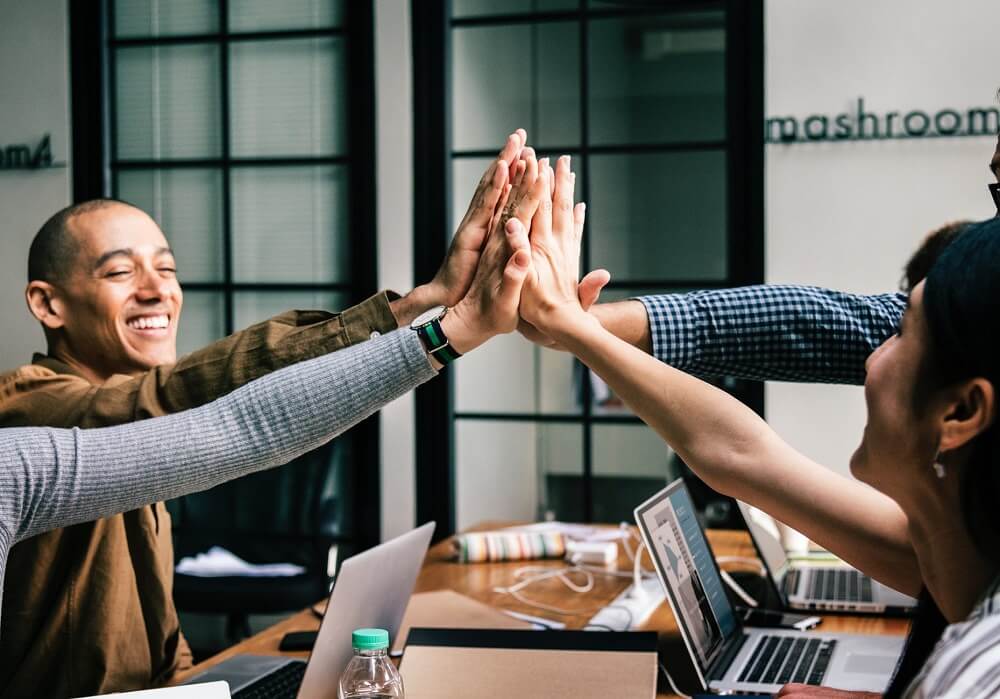 When you know who you are and like who you are, it’s easy to clap for other people.

Because confident people compete with themselves – not everyone else.

When you lack confidence, you let others determine the challenges and you compete with them on their terms.

This is the importance of self-confidence. Who wants to measure themselves against someone else’s yardstick?

When you’re able to celebrate other people’s achievements, you don’t pit yourself against them.

You learn from those people. You build relationships with successful people. You surround yourself with positive people who will clap for you too.

Related: Enough: Silencing the Lies That Steal Your Confidence

11. They Never Underestimate the Power of Consistency 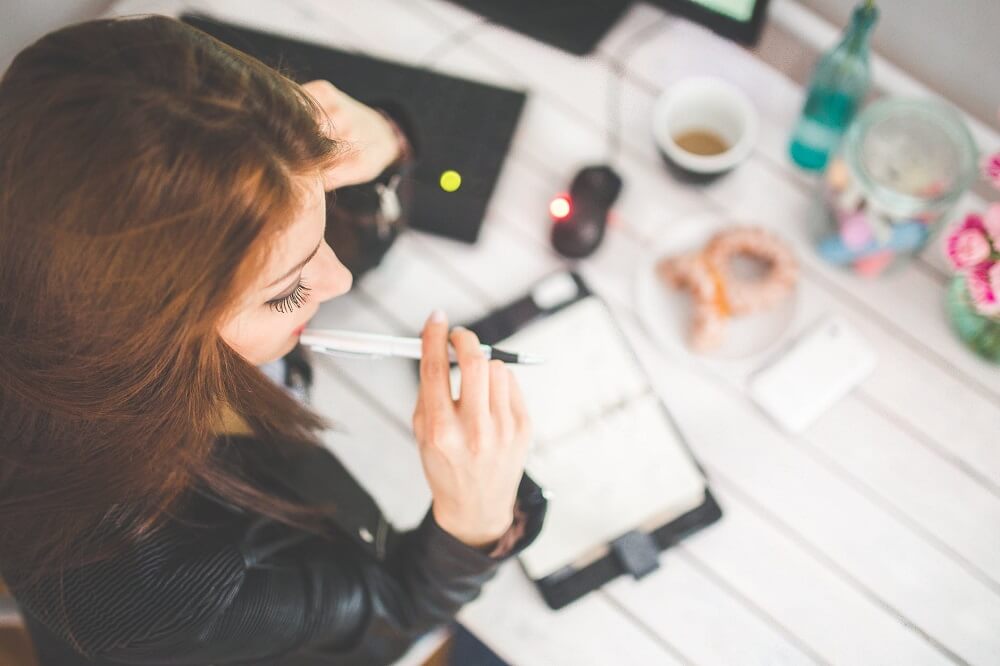 “What you do every day matters more than what you do once in a while.”

If failure and fear are natural parts of life, then the only thing that can beat them is consistency.

Because when you take a hard look at successful CEOs and leaders from all over the world, one thing is clear:

They never underestimate the power of consistency.

They put in the work to get them where they need to be.

This is one of the most powerful self-confidence examples I can share with you. Consistency is a determining factor behind your success.

12. They Speak With Conviction 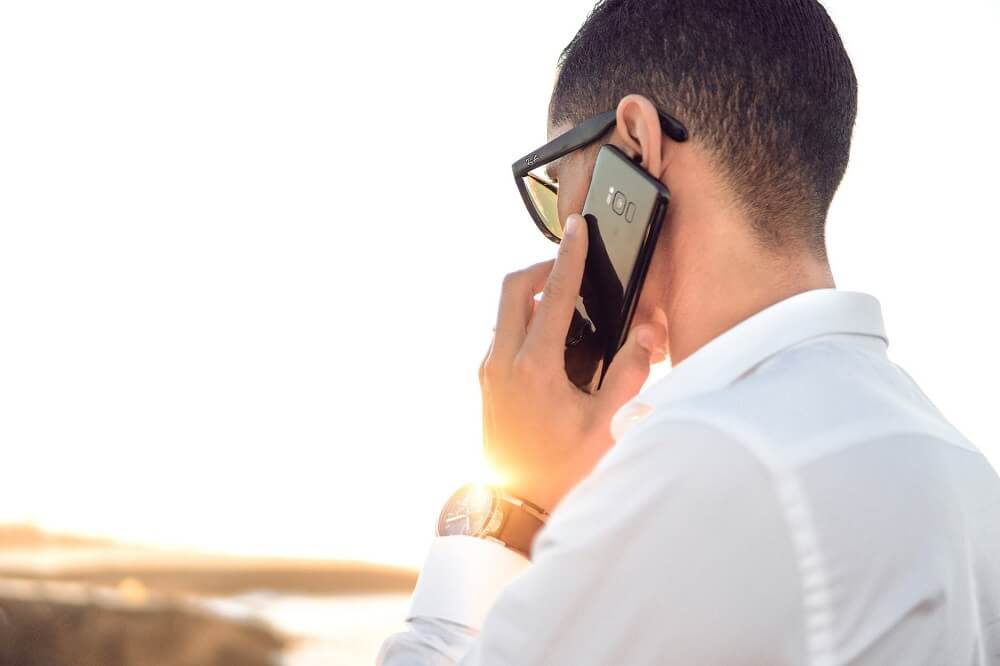 If you’re trying to learn how to speak confidently and clearly, then you must do so with conviction.

Confident people use words with intention. They speak with certainty.

And they avoid the mistake of over apologizing.

Oftentimes, people apologize for things that aren’t even mistakes at all.

When you say the words “I’m sorry” you’re essentially taking responsibility for an outcome, whether it was actually your fault.

That undermines your power.

Julian Treasure has a great TED talk on how to speak so people want to listen:

The key takeaway is that if you want to speak with conviction, you should speak slowly and clearly.

When you show others you’re not in a hurry, you also show them that you trust in yourself and abilities.

You convey that you’re worth taking the time to listen to.

13. They Have Assured and Open Body Language 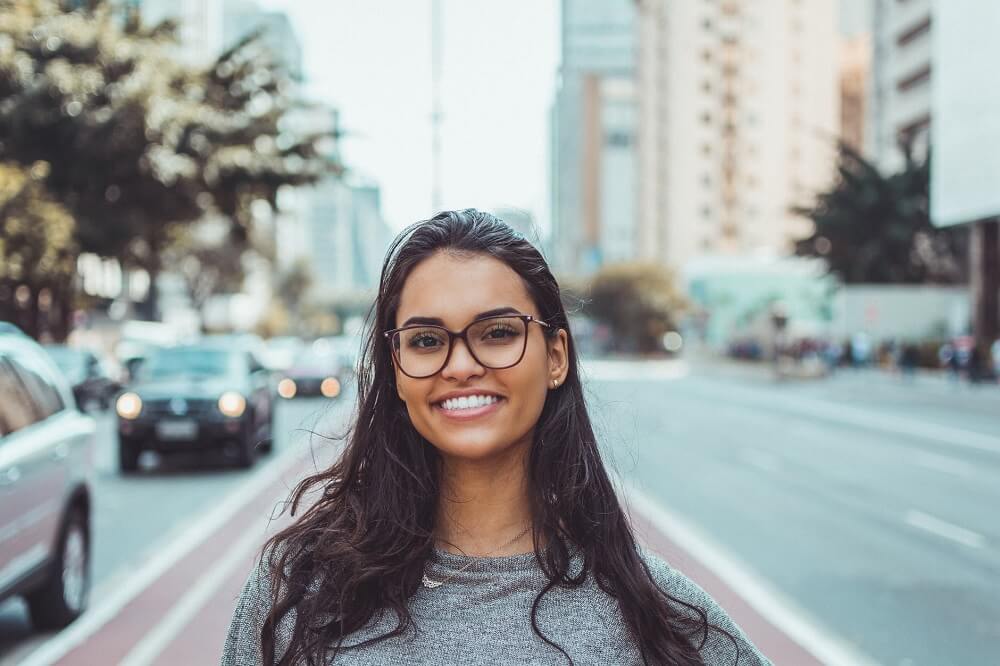 Have you ever seen someone with real presence enter a room?

Or watched a speaker command an audience on stage?

If you’ve ever seen someone walk onto a stage and command the crowd, you’ll know it’s captivating.

These are the people we listen to, learn from, and look up to.

They walk confidently. They hold their head up. They have natural energy. They make eye contact. They smile and engage with the people around them.

Their body language is open and they take up space.

And they’re always projecting the best version of themselves because of it.

My favorite self-confidence examples often come from watching motivational speakers. Most of them have mastered the art of projecting self-confidence. 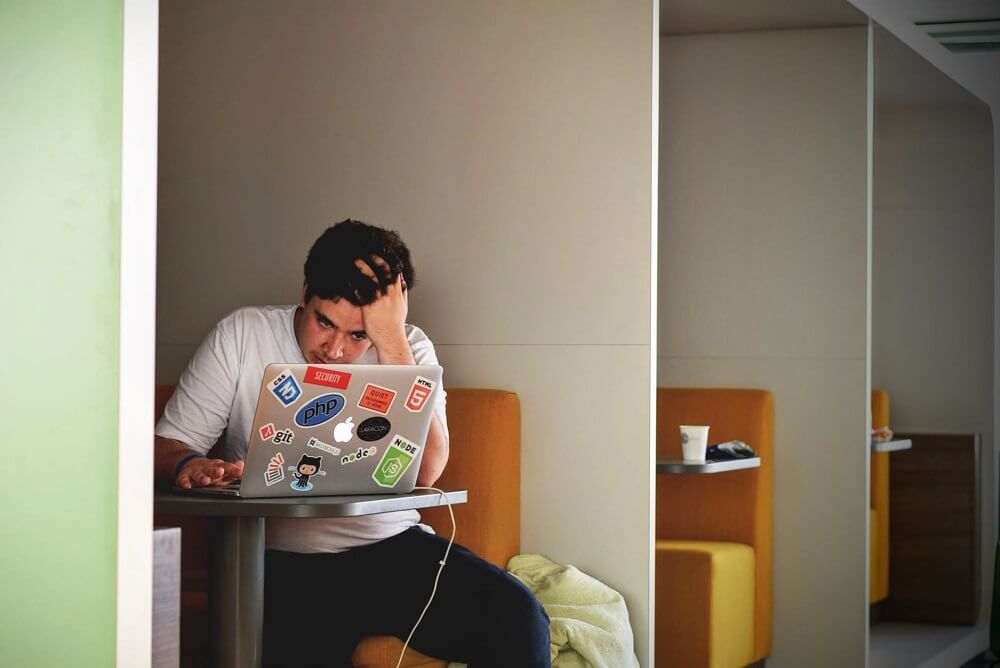 “My boss would never agree to that idea.” Are you sure?

“They’d probably want someone younger/older/more qualified than me for that position.” How do you know?

Confidence isn’t formed by focusing on the negatives in life or falling into the trap of being a victim.

What is possible, what you do have, and how you can work towards reaching your full potential, one day at a time. 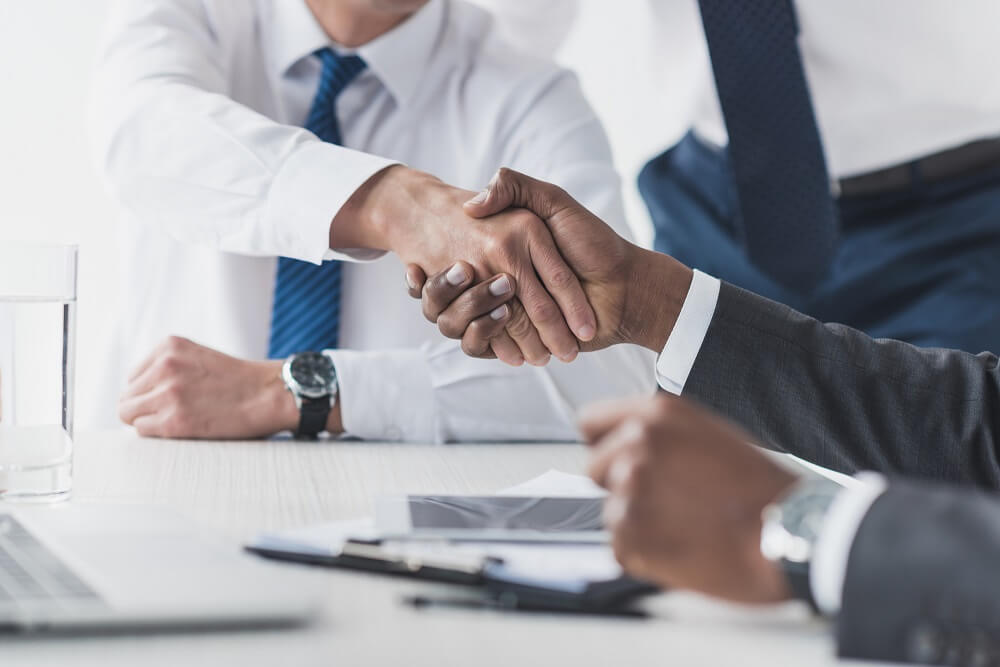 Once they’ve done a good job, confident people are happy with it and accept recognition for their hard work.

But that doesn’t mean they didn’t ask for help along the way.

Confident people realize that success is often the result of a team effort.

They ask for help and acknowledge the people who have supported them.

It’s not about being weak or unintelligent.

It’s about understanding your strengths and weaknesses and being willing to let others fill in the gaps.

After all, teamwork makes the dream work, right?

Let me know in the comments, what do you do to build confidence? 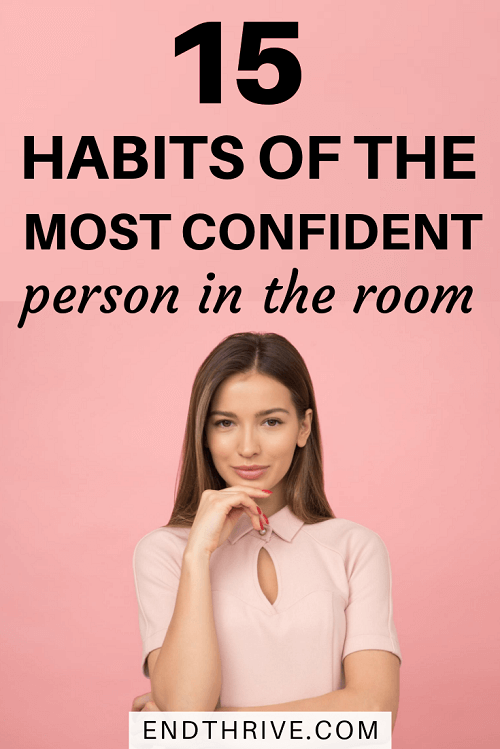 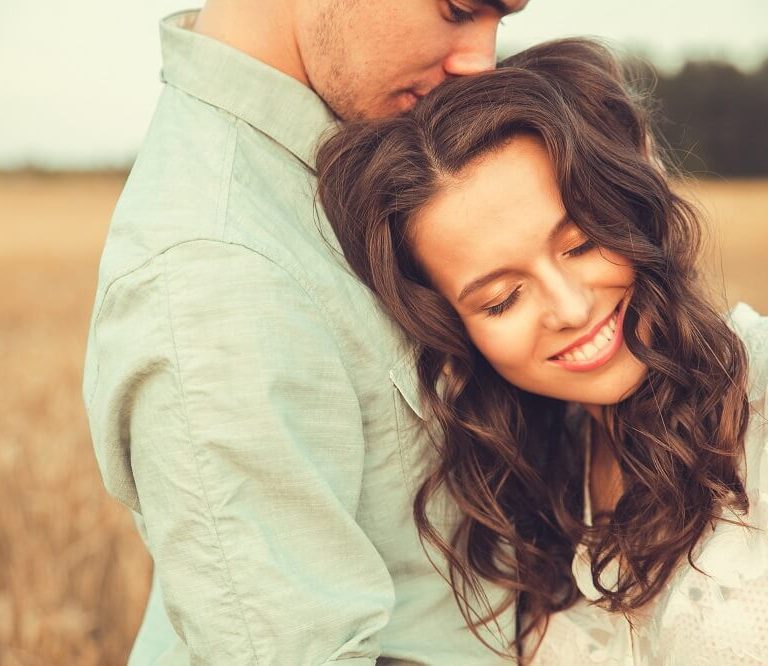 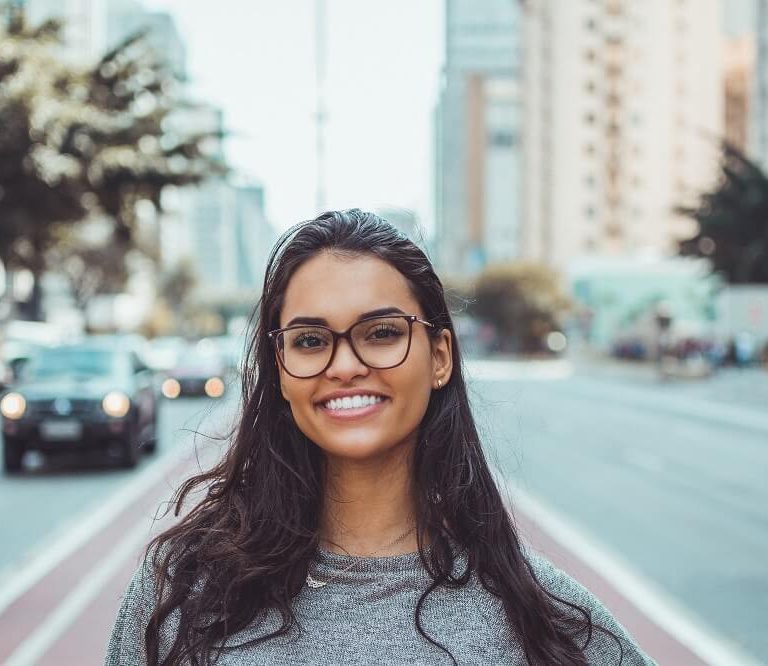